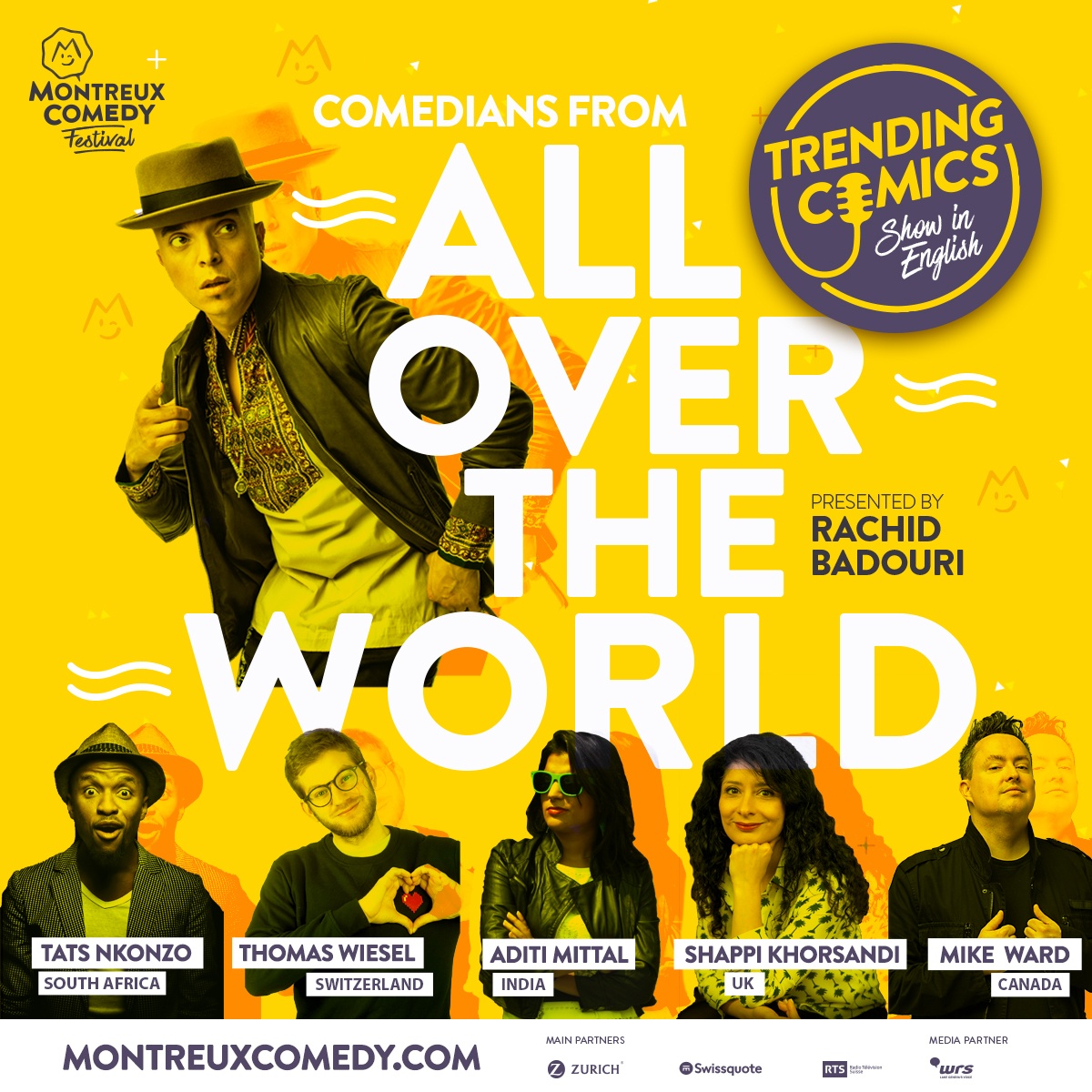 HOTTEST COMEDIANS FROM ALL OVER THE WORLD ARE COMING TO MONTREUX! ENJOY A 20CHFS DISCOUNT WITH OUR PROMO CODE

Montreux Comedy presents another fantastic line up of international acts in this year’s Trending Comics Gala, the only one fully in English. The show is fast becoming a popular feature at the Festival and takes place on Sunday December 2nd at 7:30pm in the Auditorium Stravinski of Montreux.

Some of the finest comedians performing all around the world today will gather in Montreux to be part of this international gala. This year’s “Trending Comics” show will feature artists from countries such as India, Canada, South Africa, the UK, Italy, Switzerland and more.

In keeping with founder Gregoire Furrer’s vision to build an international comedy community, this will be another great celebration of the universal nature of laughter. True to the philosophy of the Trending Comics brand, the diverse acts will not only come from vastly different corners of the globe but are also sure to offer an interesting mix of comedy styles.

This year’s edition will be hosted by Festival favourite and laugh-out-loud-funny comedy superstar Rachid Badouri. Iranian born Shappi Khorsandi, one of the most respected and funniest comedians performing in the UK today makes her much anticipated Montreux debut. The host of South Africa’s Got Talent – Tats Nkonzo, descends on our shores with his award-winning brand of humour and effervescent comedic charm. All the way from Canada we have the first ever Quebecois to win the Comedic Artist of the year at the Canadian Comedy Awards in 2016 – the one and only Mike Ward. One of India’s biggest comedy exports, fresh from shooting her first Netflix comedy special last year – the hilarious Aditi Mittal joins our stellar cast of comedians. We are also excited to have Switzerland’s very own breakout international superstar Thomas Wiesel joining us to share his latest and hottest English material. More amazing acts will be added to this list glittering line up of comedy stars, be sure to stay tuned.

Not to be missed, catch the Trending Comics Gala on December 2nd at the Montreux Comedy Festival. We are offering you a special discount for this unique comedy experience! Go to http://bit.ly/TicketsMCF18, simply use the code “FUNNY-20” (in the “Promotional Code” space on the right) and select one of the “FUNNY” categories at the bottom for 20CHF off!

CANADIAN OF THE YEAR CHALLENGE

With our new website we have decided to introduce a fun game. We’re calling it “Canadian of the Year” challenge. The idea is you nominate a friend, co-worker, or maybe a family member who lives in the Geneva area, and is Canadian who is doing something extraordinary!